"Sarah is phenomenally talented and extremely bright. She always has an excellent grasp of her case."

Sarah was appointed as Treasury Counsel in 2020. She is a grade 4 advocate and is appointed to the serious crime group panel, terrorism panel and rape panel. She is instructed as leading counsel and as junior to Queen’s Counsel, as well as acting alone.

Her prosecution practice is focussed upon serious, complex, organised and sensitive crime. She is regularly instructed to prosecute cases of murder, people trafficking, fraud, firearms, drug importation and rape. Sarah is regularly instructed in multi-defendant and multi-offence cases, often prosecuting Organised Crime Networks (OCNs), following a proactive investigation. She is familiar with the investigative techniques deployed by specialist police teams and is adept at dealing with surveillance evidence, telephone data, cell site and attribution, complex scientific evidence, the obtaining and use of evidence from abroad, and bad character evidence in the context of gang prosecutions and otherwise.

Given the nature of her practice, Sarah has advised upon and routinely deals with extremely sensitive disclosure issues. She has particular expertise in PII and the handling of sensitive material relating to investigative techniques and third party disclosure issues. Sarah is security cleared.

Sarah appears regularly in the Court of Appeal, acting in her own cases, for the Attorney General and on discrete instructions from the Appeals Unit.

This defendant was charged with offences of murder and rape and was convicted on 19.12.2022, the oldest double jeopardy case so far prosecuted.

Prosecuted Finsbury Park attacker Darren Osborne who ran over a group of Muslims returning from prayers during Ramadan. Osborne was sentenced to life with a minimum term of 43 years following his convictions for murder and attempted murder.

Instructed to prosecute a man accused of serial rape and murder in Walthamstow in 2009.

Prosecuted six defendants for involvement in a large-scale boiler room fraud targeted at elderly people, whereby many parted with hundreds of thousands of pounds.

Prosecuted a network of Slovakian traffickers for bringing women from Eastern Europe to the UK for the purposes of sham marriage and prostitution.

Prosecuted a company, its directors and the site foreman for manslaughter and health and safety offences following the death of an apprentice.

Prosecuted Jamie and Neil Acourt, who were accused but not convicted of the murder of Stephen Lawrence, for conspiracy to supply controlled drugs following a two-year surveillance operation. 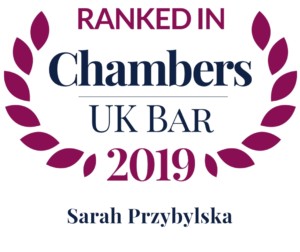