Jonathan’s criminal practice focuses on the prosecution and defence of serious fraud, the related money laundering and subsequent confiscation proceedings. In recent years he has appeared in many of the most serious and complex cases both at first instance and in the Court of Appeal.

He has particular expertise in the area of international bribery and corruption, defending and prosecuting Government Ministers, high-ranking officials and multi-national companies. He is currently instructed by the SFO in a number of cases relating to international corruption in the oil industry.

Jonathan has a proven track record of taking the most complex of cases, uncovering the true issues and presenting them in a way in which a jury or other tribunal can easily understand.

For many years he has been a leading practitioner in MTIC carousel VAT fraud having been instructed in some of the largest and most serious cases brought by the RCPO and latterly the CPS.

Jonathan has extensive expertise in dealing with cases relating to direct taxation, including income tax, capital gains tax, NIC and PAYE, in particular, in relation to accountants, labour providers and “gangmasters”. He has an in-depth knowledge of accountancy procedure and the use of forensic accountants.

Jonathan has also been widely instructed to defend in SFO prosecutions involving the defrauding and theft of pension funds and Customs prosecutions relating to VAT offences, diversion fraud and the evasion of duty.

Jonathan also has extensive experience in the restraint and recovery of the proceeds of crime under both the CJA 1988 and POCA 2002 regimes. He appeared in the leading case in relation to the determination of realisable and hidden assets and in several leading cases in relation to the calculation of benefit.

He is currently instructed in several confiscation cases which involve benefit figures and realisable assets running into tens of millions of pounds and in matters relating to restraint and enforcement in the High Court and Court of Appeal.

He is often instructed to advise high net worth individuals in respect of restraint and enforcement issues.

Jonathan was instructed by the SFO to lead the counsel team in the in the multi-jurisdiction investigation and prosecution of Petrofac Limited, which led to financial penalties totaling £77 million.  The case involved corruption in Saudi Arabia, the UAE and Iraq in respect of the award of contracts valued at over $5 billion.

Representing the SFO in the confiscation proceedings in respect of Glencore Limited.

Advising a partner of a big four accountancy firm in respect of a criminal investigation by the SFO.

Advising a Lloyds of London insurance broker in a bribery and corruption investigation by the SFO.

X and others v HMRC

Advising Secretary of State for Transport

Advising the Secretary of State for Transport in respect of the removal of Southeatern Trains rail franchise and the imposition of a £23.5 million penalty on The Go-Ahead Group.  Over the course of 6 months Jonathan provided the strategic advice in respect of the investigation into financial misreporting within Southeastern Trains and on the resulting consideration as to whether to remove the franchise and the subsequent imposition of a financial penalty.

Overseeing a LPP in respect of the freezing of the assets of a Russian billionaire oligarch.

I acted for the Crown in a series of appeals by James Ibori, the former Governor of the Delta State, Nigeria, his former solicitor Bhadresh Gohil following allegations of corruption against the MPS and allegations of misconduct against the original prosecuting team. I was responsible for leading a team which conducted a complete review of the safety of the convictions, which had been obtained over the course of 6 years and then defending those convictions in protracted proceedings in the Court of Appeal. All the convictions were upheld.

Acted for the SFO in the successful prosecution of Bertling and 6 Directors and employees in respect bribes paid to a high ranking official of Sonangol, the Angolan national oil company, in order to secure lucrative freight forwarding contracts.

Acted for the SFO in the investigation and restraint proceedings against the former Ukranian Minister for natural Resources.

Widely reported as the largest VAT fraud ever prosecuted, with an estimated loss to the Revenue of £365 million. Jonathan led two juniors on behalf of the Crown. An enormous case with 50,000 pages of statements and exhibits and millions of pages of unused material. The defendants eventually pleaded guilty 2 weeks into the listed trial.

The case received substantial publicity in the national TV and print news.

Jonathan led for the Crown in the prosecution of Mr Sander in relation to the laundering of £7 million that was the proceeds of MTIC fraud. At the initial trial the jury were tampered with and the Judge ruled that he would complete the trial without a jury. This was the first time that such an order had been made under the new law.

There followed 2 interlocutory appeals, both heard by the Lord Chief Justice. The case was eventually heard by the Recorder of Birmingham with a protected jury. The defendant was convicted on all counts.

A confiscation case that resulted in orders of £184 million being made, the largest ever in the UK and which eventually made it to the Supreme Court. In proceedings that have lasted over 10 years Jonathan acted for the Crown and in 2017 obtained enforcement orders in the High Court in respect of millions of pounds worth of property.

Jonathan led two juniors in the successful prosecution of an accountant and two property developers charged with evading over £1 million in income tax, through the double manipulation of their accounts and tax returns. The case involved the management of over one million pages of unused material and extensive evidence from forensic accountants. Jonathan conducted the confiscation proceedings at first instance and in the Court of Appeal, leading to an order of over £1 million.

This was a very substantial MTIC fraud prosecution. The loss to the Revenue was in excess of £175 million. There have been 4 trials, leading to the conviction of 15 defendants. Jonathan acted as the lead disclosure counsel, in a team of 5 counsel, and was responsible for all disclosure policy and issues at substantive hearings. The first defendant received a sentence of 17 years, believed to be the longest sentence ever imposed for fraud. Jonathan conducted the very substantial confiscation proceedings, which led to substantial orders and default sentences. 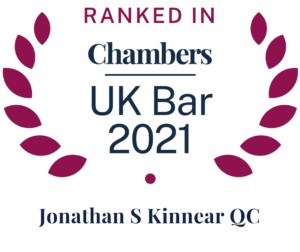